I’ve made a very simple patch to make my guitar sound like a violin, without having to keep a hand on the volume pot. It turned out that it can also make a nice “reversed tape” sound, a little bit like in old recordings by Jimi Hendrix and other guitarists of the 60’s and 70’s. It is not another reverse delay pedal, though.

It is based on an enveloppe follower, much like in enveloppe filter pedals or auto-wahs, only the enveloppe doesn’t control any filter, it only affects the volume of the ouput. An enveloppe follower ([env~]) comes with the vanilla distribution of Pure Data. Everytime the volume raises above a certain threshold (an attack is supposedly occuring), the volume drops to zero and then ramps up slowly (depending on the length of the attack) back to 1.

The user can set the value of the threshold as well as the duration of the attack (as in Attack-Decay-Sustain-Release in synthesizers, only here only the attack can be set). Longer attacks and long lasting notes sound like a violin (sort of…), and shorter attacks with many fast notes sound more like a reversed tape. 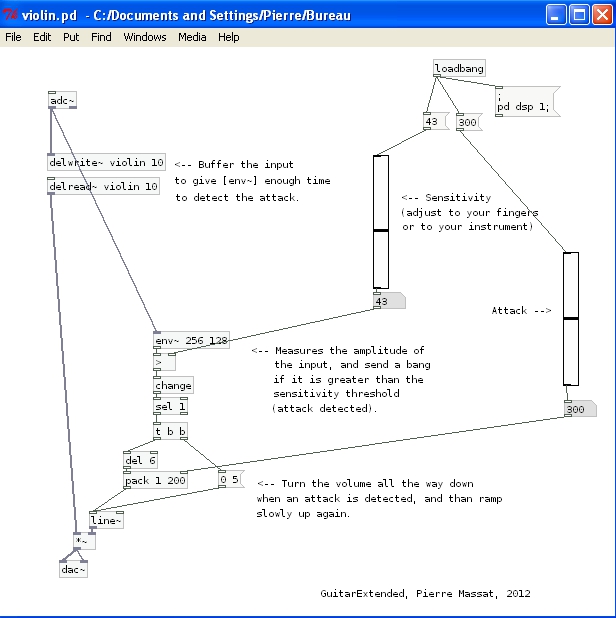 Please note that the effect won’t be triggered unless you actually pluck the string for each note (the amplitude of the input has to drop below the threshold and raise again above it for the effect to be triggered). Note also that the sensitivity may have to be adjusted to your instrument or to your way of playing. Finally, the [env~] object is set to analyse the input in a window of 256 samples to reduce the size of the buffer (at 48000 Hz, 256 samples are roughly equivalent to 10 ms). This reduces the latency, but also reduces the ability of [env~] to detect low frequency notes. Depending on your needs, you may have to increase the window size as well as the buffer length.

The patch can be downloaded here.